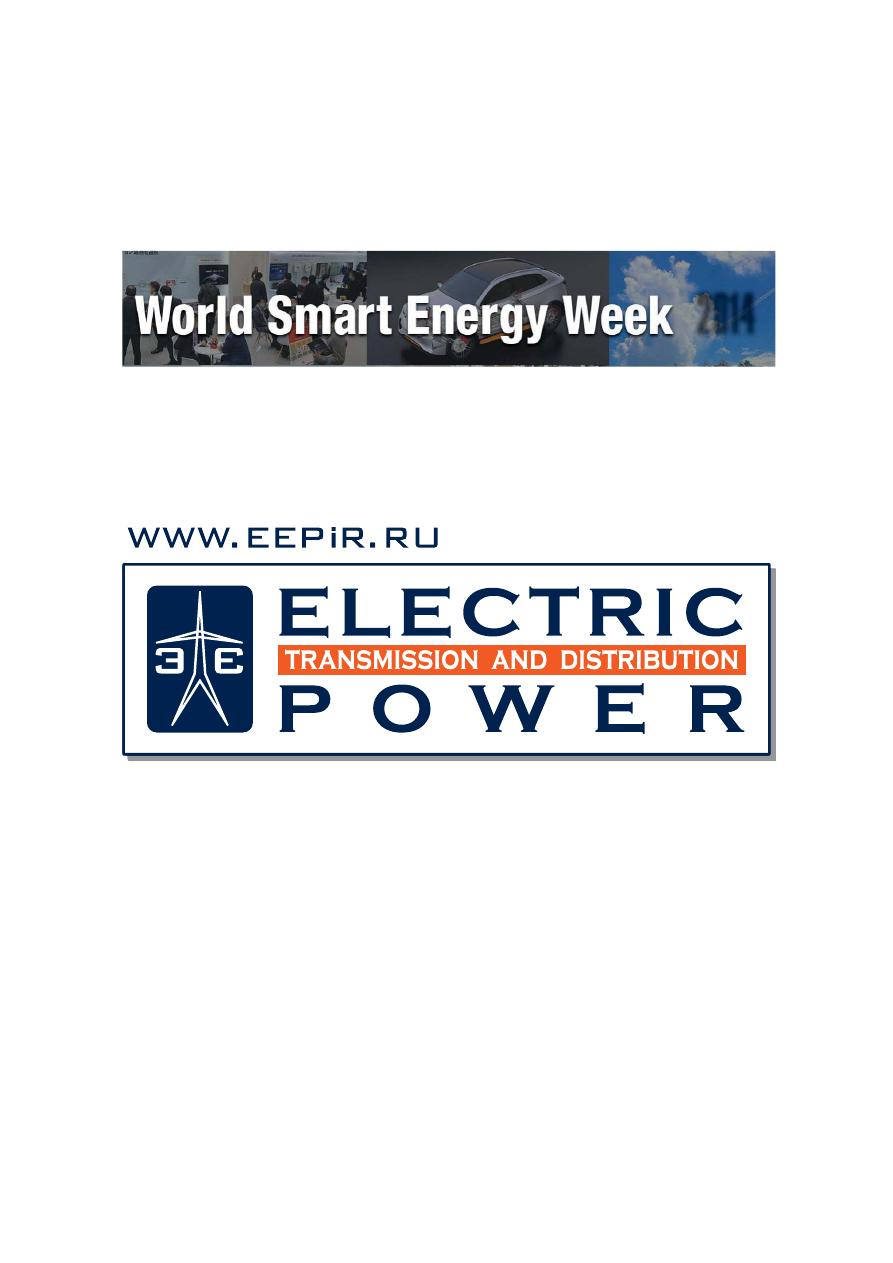 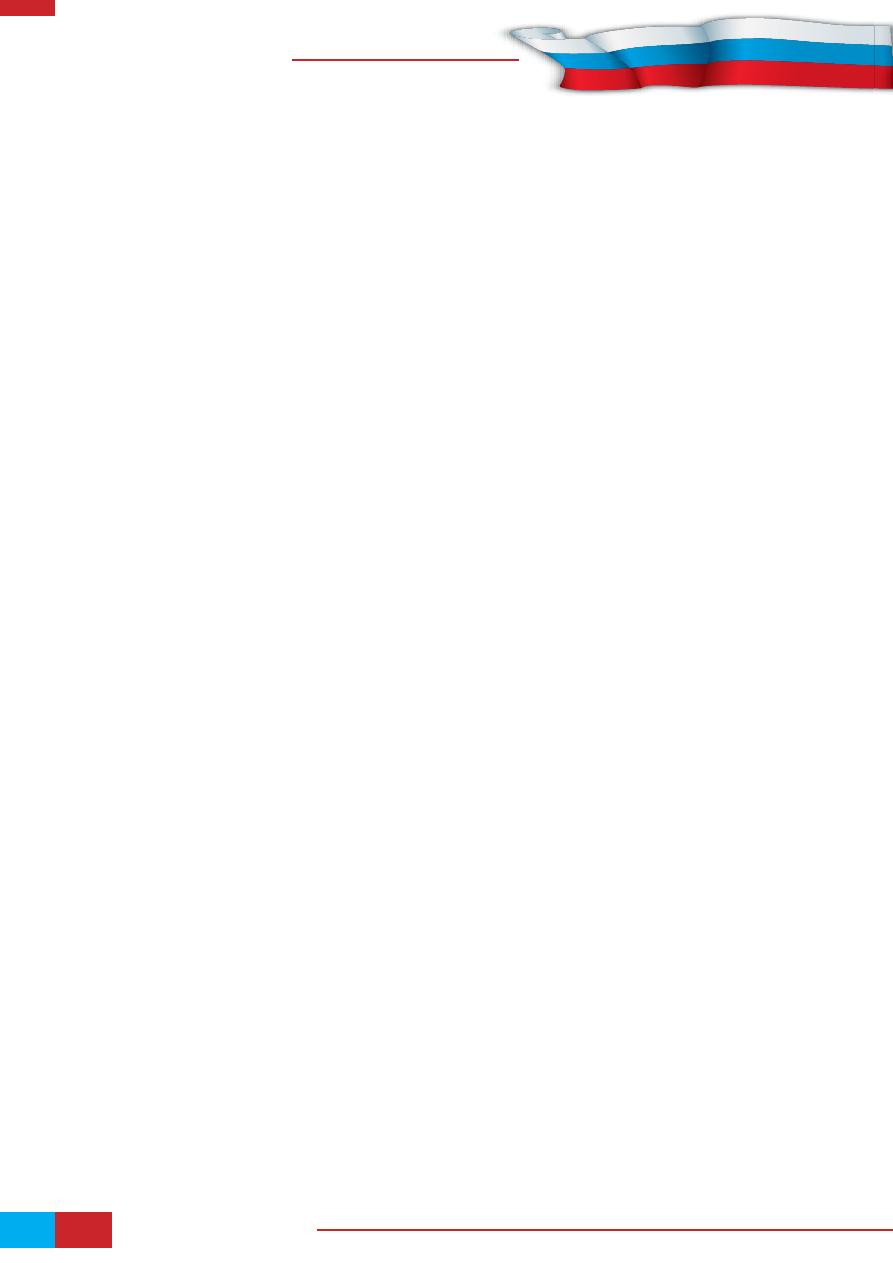 Innovation Suite of IT-Systems to

rst-of-its-kind suite of IT-systems designed to

control power supply in Sochi was commissioned
in September of 2013. Information systems of the
Power Supply Control Centre (PSCC) of Sochi

energy region were designed according to the special order
of JSC “FGC UES”, part of JSC “Russian Grids” Group
of Companies. The project was implemented within the
framework of an agreement on interaction signed between
JSC “FGC UES” and Rostec Corporation. The direct pro-
ject contractor was CJSC “RTEC”, part of Rostec Corpo-
ration. The large-scale high-tech project was implemented
within a short time. The period from development of tech-
nical solutions to commissioning of the system at PSCC of
Sochi energy region was less than half a year.

The main task of PSCC is monitoring and analyzing

the general and operational situations at power facilities
involved in external power supply of Olympic venues and
infrastructure facilities in Sochi, as well as organization
of interaction and coordination of efforts of all entities.
PSCC is to ensure ef

cation of the taken

decisions through introduction of innovative technologies,
analysis and visualization of information that is critical for
situational control of operation both in normal operating
and emergency modes.

PSCC implements a suite of three integrated basic in-

The main tasks of PSCC suite of information systems

are the following:
•   monitoring of general and operational situations. Reg-

ties supplying power to Olympic venues in Sochi re-
gion;

•  coordination of actions of organizations operating

Olympic venues in case of accidents and emergency
situations in external power supply networks of these
venues;

of decisions. DSS is designed for creating conditions for
individual and joint work of operating personnel of sub-
stations,

eld crews and PSCC personnel both in normal

operating mode and in emergency situations.

PSCC DSS is based on QuaSy-DSS platform; its meth-

odological basis is formed by innovative smart technolo-
gies, including methods of ontological modelling, the
concept of systemic situational analysis of activity, expe-
rientology as the direction providing for structuring, or-
ganizing, accumulating and translating of experience, as
well as the language of structured messages. This was the
actual foundation for automation of processes of collec-
tion, processing, statistical analysis and visual display of
information about current activities of organizations sup-
plying power to Olympic venues, including maintaining
electronic operating documentation by PSCC personnel.

sages (basic real-time information) from workplaces
of PSCC on-duty operating personnel generated on the
basis of the power engineer’s language of structured
messages;

submission of operational situation reports to various
levels of decision-taking in order to create a coherent
view of the objectively existing situation; 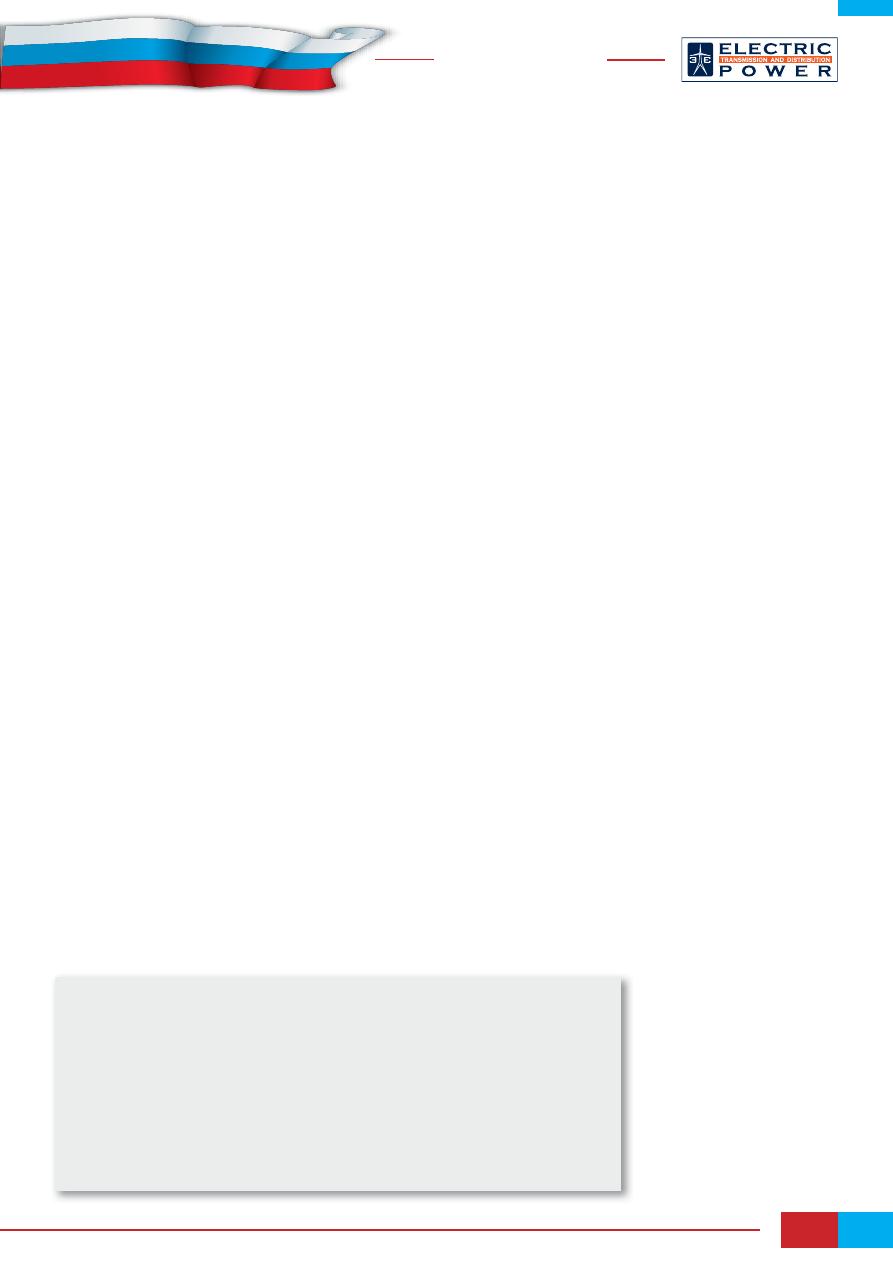 private-public company established in 2007 by a resolution of the Government of
the Russian Federation as a joint enterprise of Rostec State Corporation and a group
of high-tech IT-companies with the aim of designing and manufacturing in Russia of
trusted telecommunication equipment and communications systems. RTEC is a part
of JSC “Ruselectronics” Holding.

is a group of enterprises specializing in designing and

manufacturing of electronic equipment, electronic components, electronic materials
and equipment for their manufacture, as well as microwave and semiconductor
devices. The holding company was founded at the beginning of 2009 on the basis of
the same-name state holding operating since 1997.

•   maintaining and actualizing of the database of pow-

le of equipment with the respective list of attribu-

•   maintaining a database of subjects of activity on the

basis of a task-oriented classi

er of subjects of activ-

ity in order to facilitate decision-taking and organizing
activities of DSS users;

•   design, development and visualization of models of

organization of the enterprise’s activities and decision-
taking with possibility of their further conversion into
database objects;

•   organization of PSCC personnel’s activities through

•   displaying of geoinformation data through interaction

with the regional GIS-node installed in PSCC;

•   monitoring of movements of emergency and repair

crews with the use of mobile systems and real-time
map display;

•   monitoring of operating vehicles with the use of mo-

•   integration of all three systems, exchange of informa-

maintaining of entities (subjects of activity).

ment, visualization of models of the enterprise’s activ-
ity organization by tasks.

tured messages (basic real-time information) from mobile
and stationary automated workplaces of operating and
dispatch personnel generated on the basis of the power
engineer’s language of structured messages.

ow of structured messages is organized on the

basis of the power engineer’s language of structured mes-
sages (PLSM), which is a speci

c instance of the Lan-

guage for Organizing Com-
mon Activity LOCA. It should
be emphasized that an integral
part of PLSM is strict use of
dispatchers’ names of facili-
ties and equipment, which are
correspondingly stored in the
integrated database. Struc-
tured messages are generated
by operation, maintenance
and administrative person-
nel by means of operations
logs (OL). They can also use 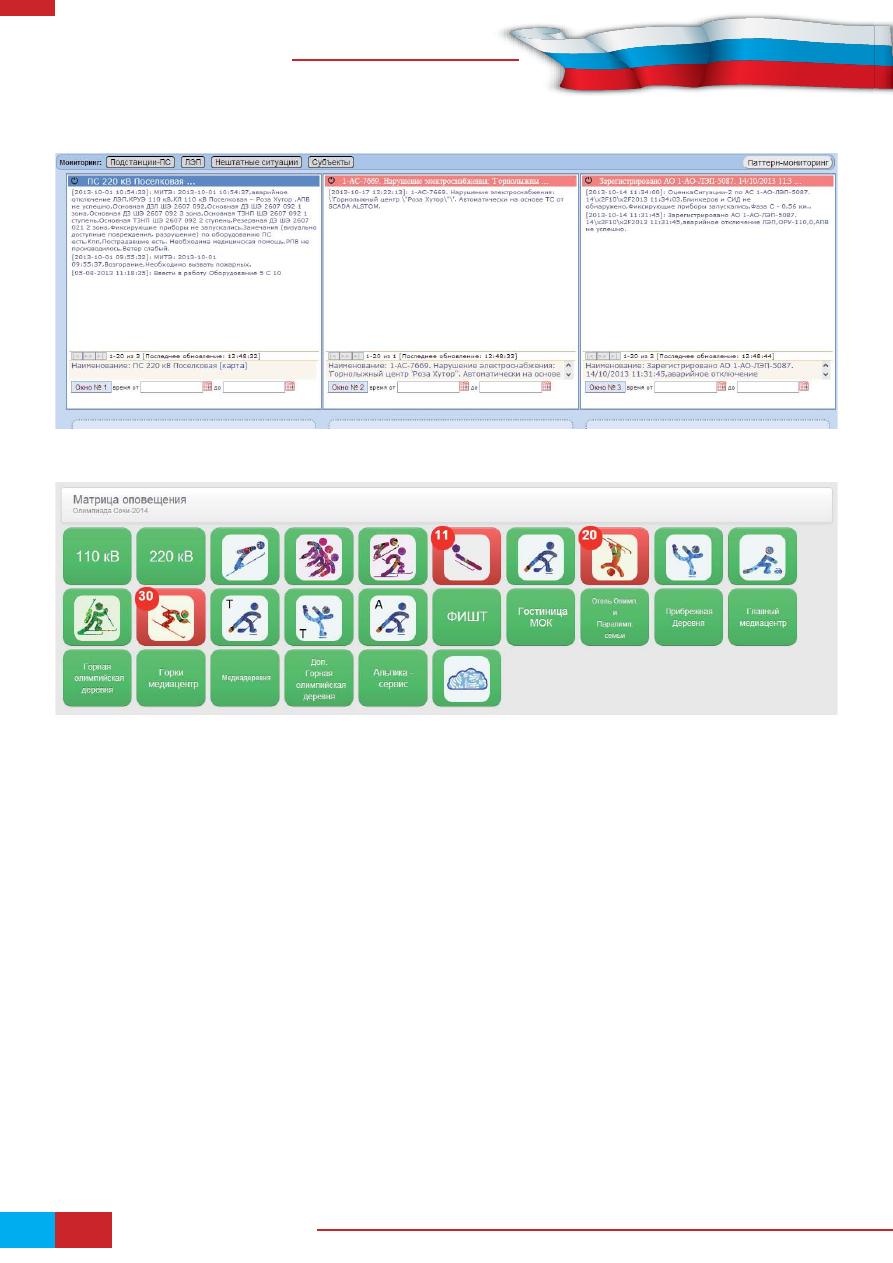 equipped with. OL, PSIT and PMIT are organized into a
network structure which can be controlled by transform-
ing it, when required, into a hierarchically organized sys-
tem of sources of

of well-structured messages in-coming from the message
server subsystem, their classi

erational situation reports to various levels of decision-
taking in order to have a full view of the objectively exist-
ing situation. Examples of graphic interfaces are shown in
Fig. 1—2.

The subsystem of registering and maintenance of

le of equipment with the

The subsystem of registering and maintaining subjects

of activity is designed for maintaining a database of sub-

jects of activity on the basis of a task-oriented classi

subjects of activity. Used for decision-taking and organ-
izing activities of DSS users.

The subsystem of maintaining the power engineer’s

language of structured messages (PLSM) is designed for
maintaining, storing, developing and direct practical use
of databases of terms, syntactic rules, typical word com-
binations and autosyntax rules during automation of pro-
cesses of organization and communication of messages
from communication devices and stationary automated
workstations of the operating personnel, as well as for
maintaining operations logs of substations,

and the joint operations log of the Substations Group Con-
trol Centre.

The tool for visualization and actualization of electric

circuit diagrams related to the database of electric power
facilities.

It is a graphic modeling tool for designing electric cir- 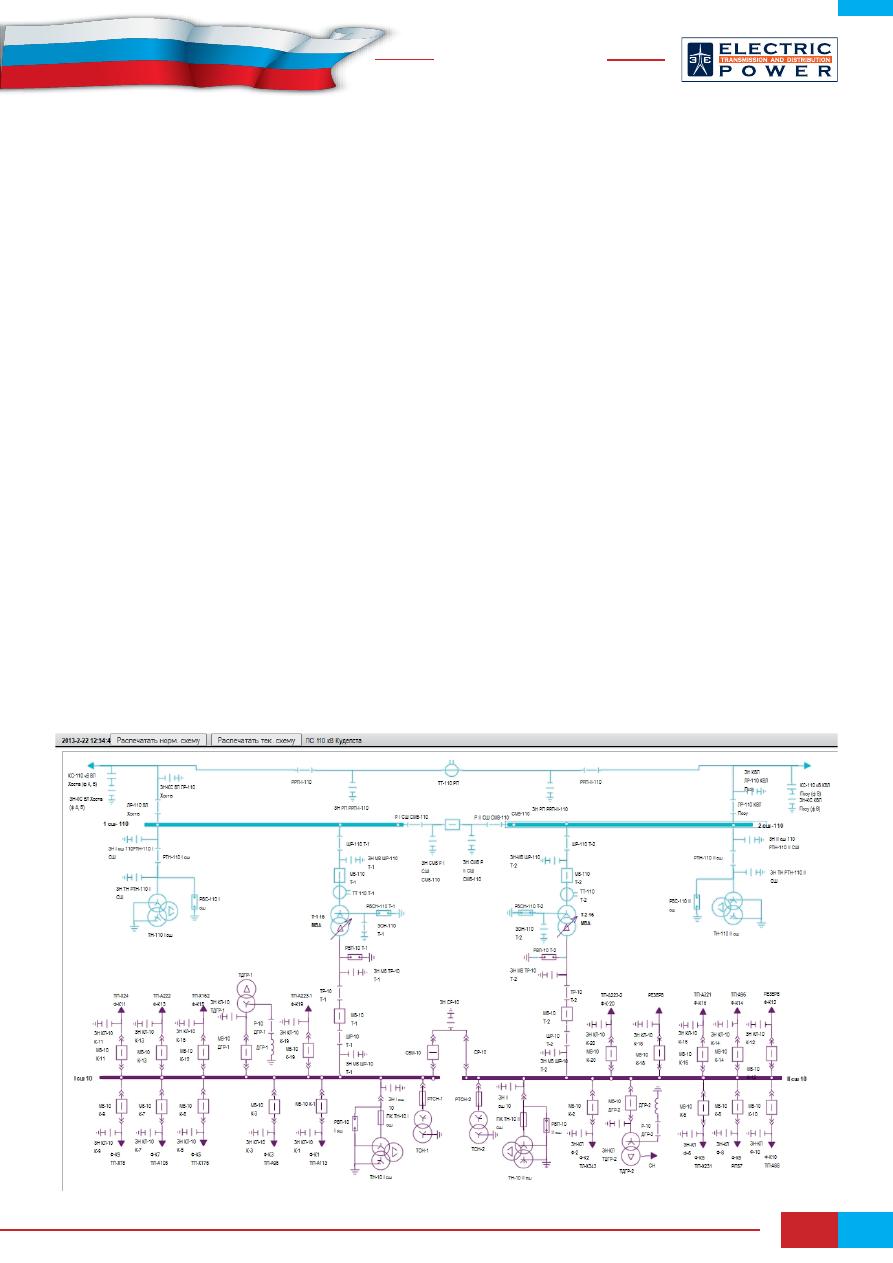 tribution devices, connections, elements of their compo-
nents, including description of required attributes, as well
as correlating electric circuit diagrams and their elements
with corresponding objects of databases displaying their
structured description. A Web-oriented tool making it pos-
sible both to conduct its integration into any Web-appli-
cation and use it as a separate stand-alone application. An
example of the interface is shown in Fig. 3.

A graphic modeling tool for designing, developing and

visualization of models of organization of the enterprise’s
activity and decision-taking by decision-makers, with a
possibility of their further conversion into objects of data-
bases. Includes tools for creating classi

ers, taxonomies for subjects (entities) and

objects of business activity, building mereotopologic task
trees, structuring business activity relations, correlating
them with corresponding databases. Provides a possibil-
ity of creating and visualizing models of organization of
the enterprise’s activity by tasks, designing and describing
well-structured models of infrastructure space and timing.
A Web-oriented tool making it possible both to conduct its
integration into any Web-application and use it as a sepa-
rate stand-alone application.

A subsystem of maintaining operations logs of the net-

work control centre. The principle of using OL is described
in detail in the joint work by A. Badalov, D. Gvozdev,
V. Pelymsky, B. Shvedin.

tured messages) by means of communication devices (tab-
lets) of the operating personnel of substations. Provides
a possibility of generating and communicating messages
with the use of information pro

les of equipment of cer-

Messages are generated in the dialogue mode with the

use of autosyntax in accordance with the speci

The substation operating personnel was offered a dia-

logue-based model of situational analysis (DMSA), which
made it possible to signi

takes in stress conditions. An example of the interface is
shown in Fig. 4.

CAPABILITIES AND TECHNOLOGIES OF GIS-BASED

DSS makes it possible to work with geoinformation

data. Data of external GIS-systems can be imported into
DSS GIS-system. All data are consolidated and by means
of integration services are sent to adjacent SCADA-sys-
tems. In addition, integration services enable real-time
displaying of data, reports, diagrams from DSS of the
Joint Situational Analysis Centre on a geographic map. 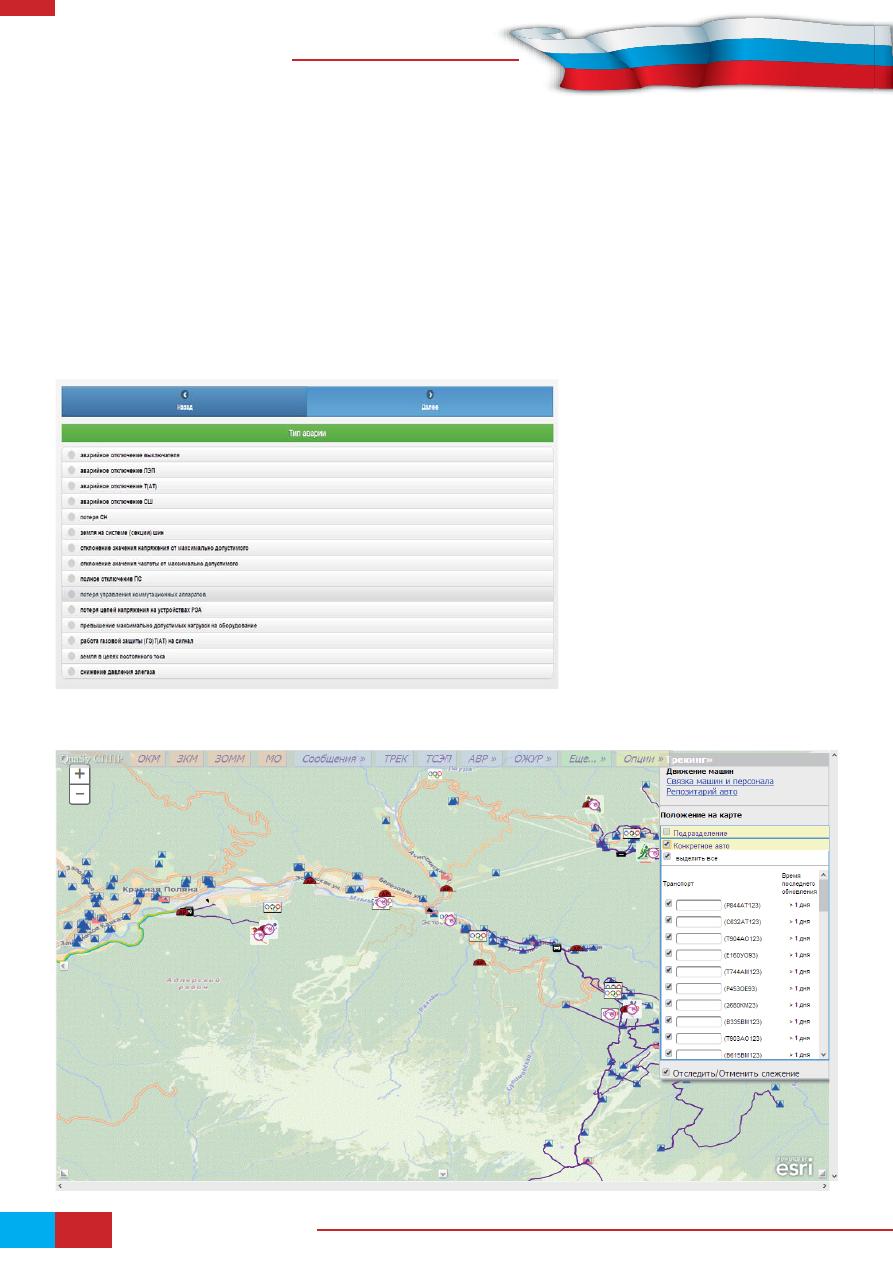 Also, the GIS-subsystem receives information about

the location of operating vehicles and crews. DSS in-
terface enables easily navigating the map with all avail-
able objects to be supervised within the framework of the
PSCC IS project. A fragment of basic DSS interface with
the GIS-underlay is shown in Fig. 5.

During implementation of the project they used the

logic of displaying monitoring areas according to their
signi

cance for the power supply of the region. In order to

provide full visualization of monitoring areas and depend-

ing on the level of signi

cance each of the areas is high-

lighted on the map with a certain color (the traf

cant’ and red — ‘most signi

diagrams and operation pattern of Sochi energy region of
Kuban energy system as well as condition of the equip-
ment (main SCADA-1). For the

rst time in the Russian

It should be emphasized that

SCADA-EMS, built on the basis of
the equipment database following IEC
(CIM) standards, was integrated for the

ow of the manipulated telem-

etry is strictly attached to the equipment
database and supported by it.

Special attention should be paid to

the e-terravision technology (SA - situ-
ational awareness). It is the

integration of the given solution, which
is innovative for the world practice, in
Russia.

The redundant SCADA Syndis was 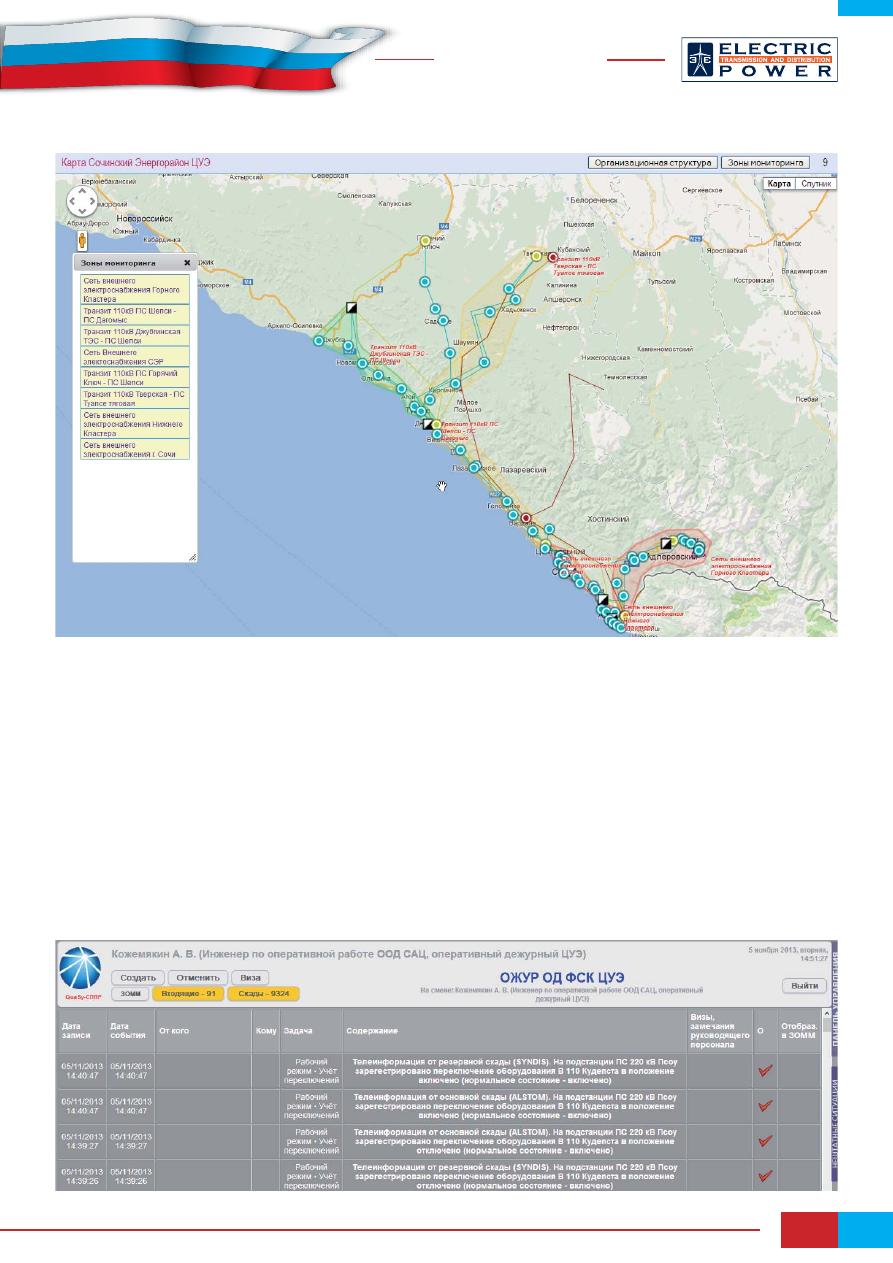 ow, was used for the

integration of the redundant SCADA and DSS was carried
out. The redundant system provides monitoring and dis-
playing diagrams and operation pattern of Sochi energy
region of Kuban energy system as well as condition of the
equipment.

technology of semantic integration between SCADA-
EMS e-terraplatform and QuaSy DSS by using the
QuaSy ConFrame-Electric Federator tool. The seman-
tic integration was carried out with the use of the se-
mantic ID generator for all equipment, as well as for
the full telemetry

ow. Thus, each telesignal and telem-

etering had not only its address, but also its semantic
ID.

For the purpose of integration with SCADA Syndis

interface, which clearly demonstrates the way teleinfor-
mation is received from SCADA Alstom and SCADA
Syndis.

The first-of-its-kind suite of IT-systems designed to control power supply in Sochi was commissioned in September of 2013. Information systems of the Power Supply Control Centre (PSCC) of Sochi energy region were designed according to the special order of JSC “FGC UES”, part of JSC “Russian Grids” Group of Companies. 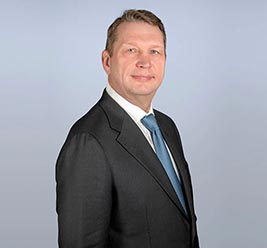 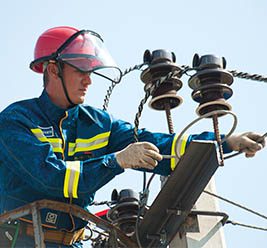 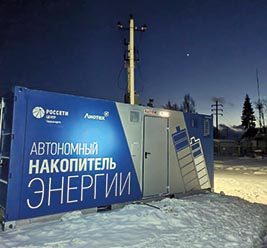 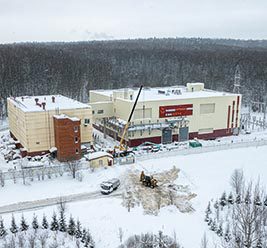 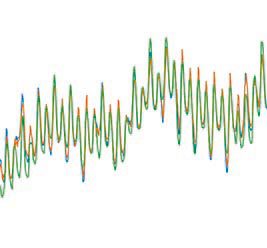 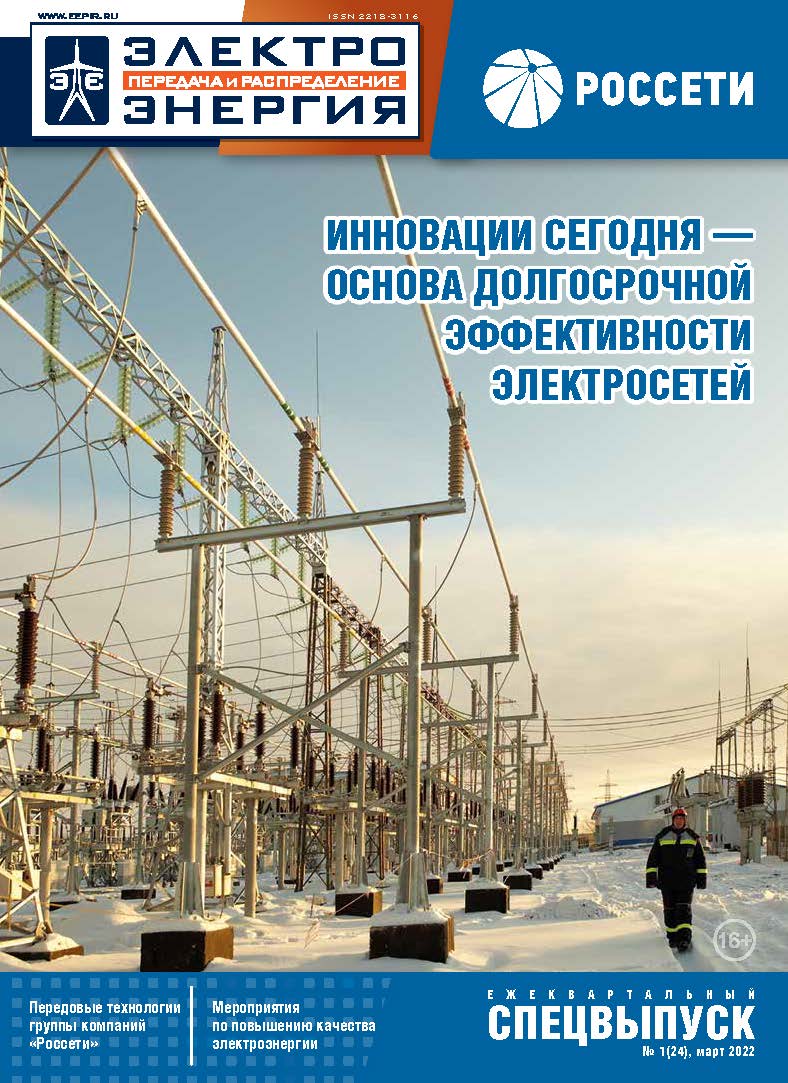 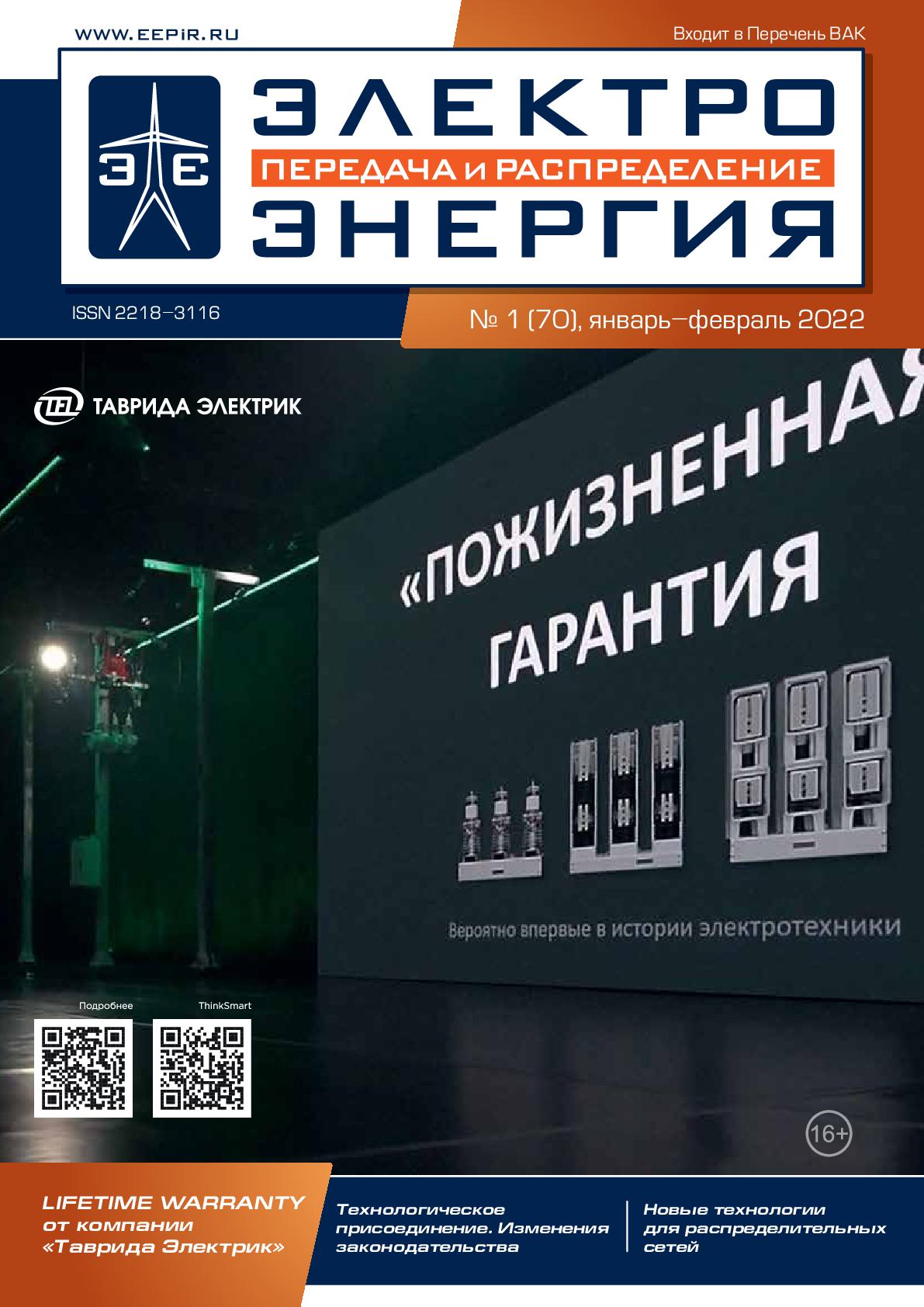