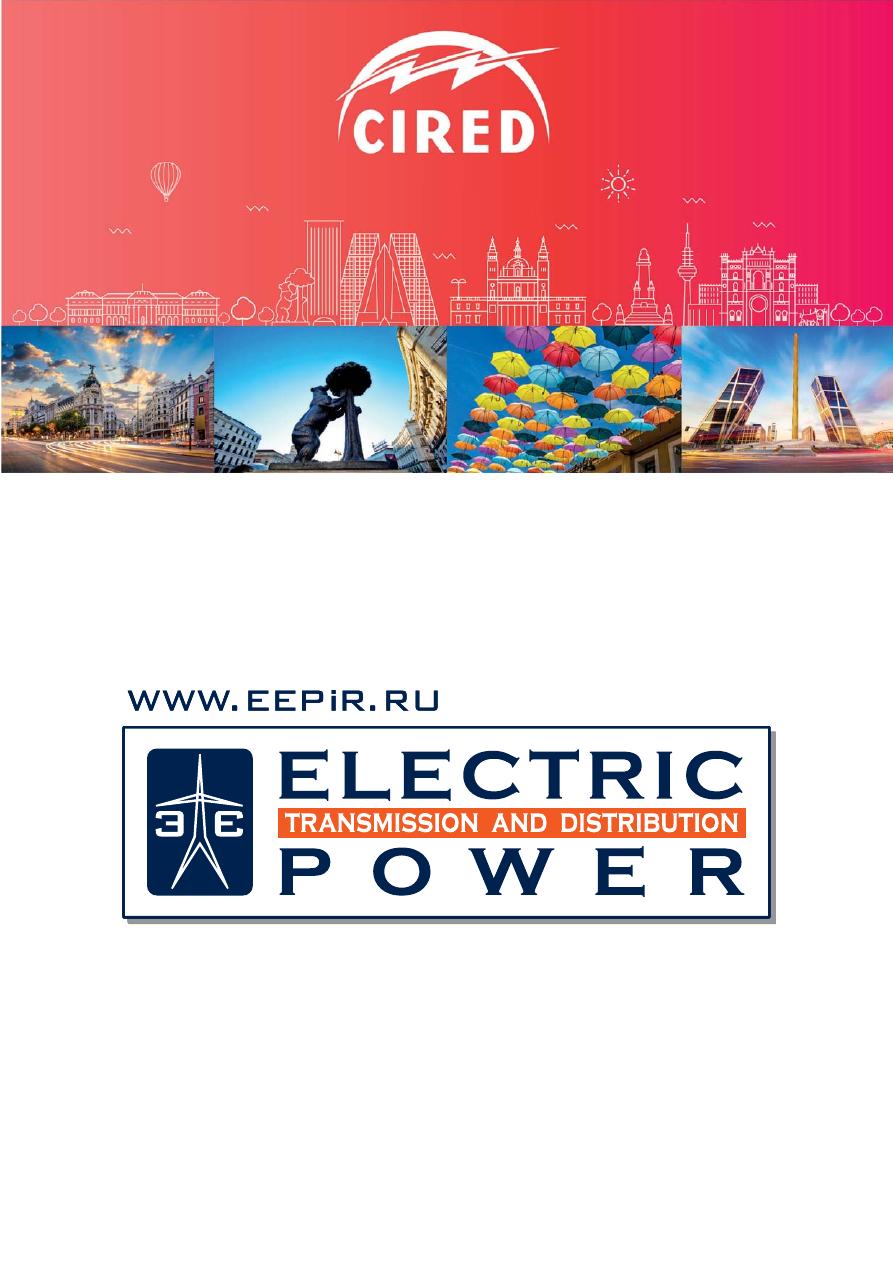 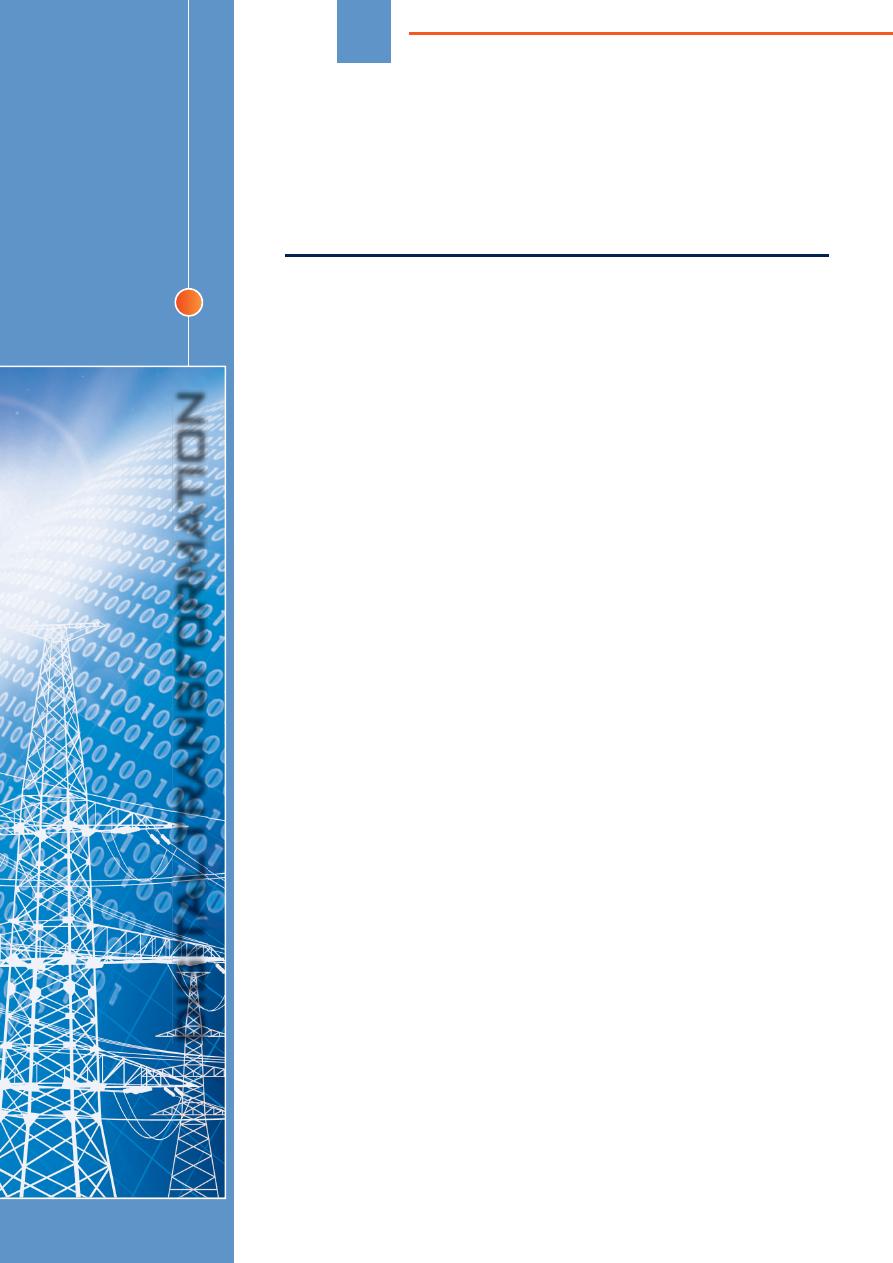 and innovation of PJSC

Digital transformation of electric power industry is one of the
purposes of the national program “Digital Economy of the Russian
Federation” (approved by the Russian Federation Governmental
Order no. 1632-

oncept was developed by PJSC "Rosseti"

for establishing one-for-all approach to the digital transformation
of processes in power grid. In accordance with the principal provi-
sions of the Concept, digital transformation of PJSC "LENENERGO"
electrical grid is performed and a pilot project to create digital
power distribution zone is implemented.

he  digital  network  assumes  a  breakthrough

tem at a technology level.

First of all, the network digitalization is expected the

•  ensuring the synchronous operation of generation re-

As  a  part  of  an  interdisciplinary  approach  to  digital

ure 1) includes the implementation of measures in the

• creation of a Single Grid Control Center (GCC) and

the  introduction  of  automated  dispatch  management

system for network operation control with an advanced

• modernization of secondary infrastructure in operat-

reduce business losses and to use accounting records

in computational and analytical functions;

As a result of the interdisciplinary approach to net-

of  all  functional  areas,  technical  and  economic  eﬀ ects

from the implementation of PJSC "LENENERGO" digital

transformation concept could be achieved. 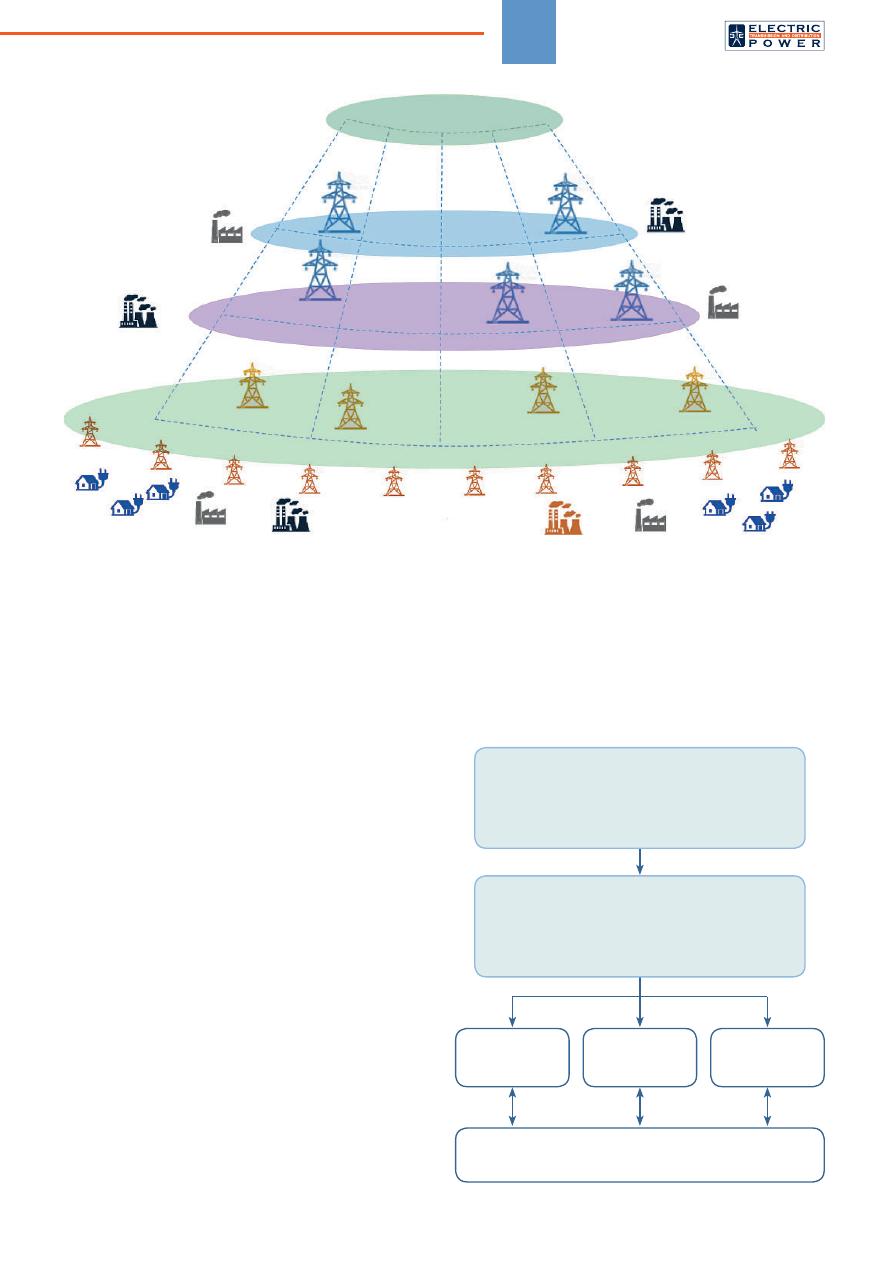 Under  the  multiple  application  of  modern  technolo-

gies aimed at digitalization, it is planned to achieve the

duration and frequency of power failures) by 50%;

On the ﬁ rst stage preparation of a technological base

for  digitalization  is  planned,  as  well  as  introduction  of

of a single grid control center for PJSC "LENENERGO".

A number of pilot multiple-purpose projects for the sub-

sequent distribution of the most eﬃ  cient business solu-

tions in PJSC "LENENERGO" will be also implemented.

The stage is scheduled for completion in 2022.

The second stage is aimed at the complete automa-

will eliminate the actual problems in the organization of

ope rational and technological management. Also, it will

identify targets for investment over the next 5-10 years.

The stage is scheduled for completion in 2025.

In the third stage the digitization of the main elements

tribution zones) will be completed. In addition, during this

stage introduction of technologies based on artiﬁ cial in-

telligence and machine learning will be developed. Then

Big Data technology comes into play when all available

methods  of  automation  and  control  are  implemented

and the eﬃ  ciency increase task is already not so impor-

ON IMPLEMENTATION OF PROJECTS AIMED

Head of the Management Committee:

WORKING GROUP ON IMPLEMENTATION OF

Head of the working group:

new dependences of key performance indicators of the

agement algorithms. This process is aimed at a qualita-

tive leap in improving eﬃ  ciency of all processes and it

will provide at least 10% growth of the main parameters:

scheduled for completion in 2030.

A number of working groups on digitalization areas

chaired by the Management Committee (Figure 2) was 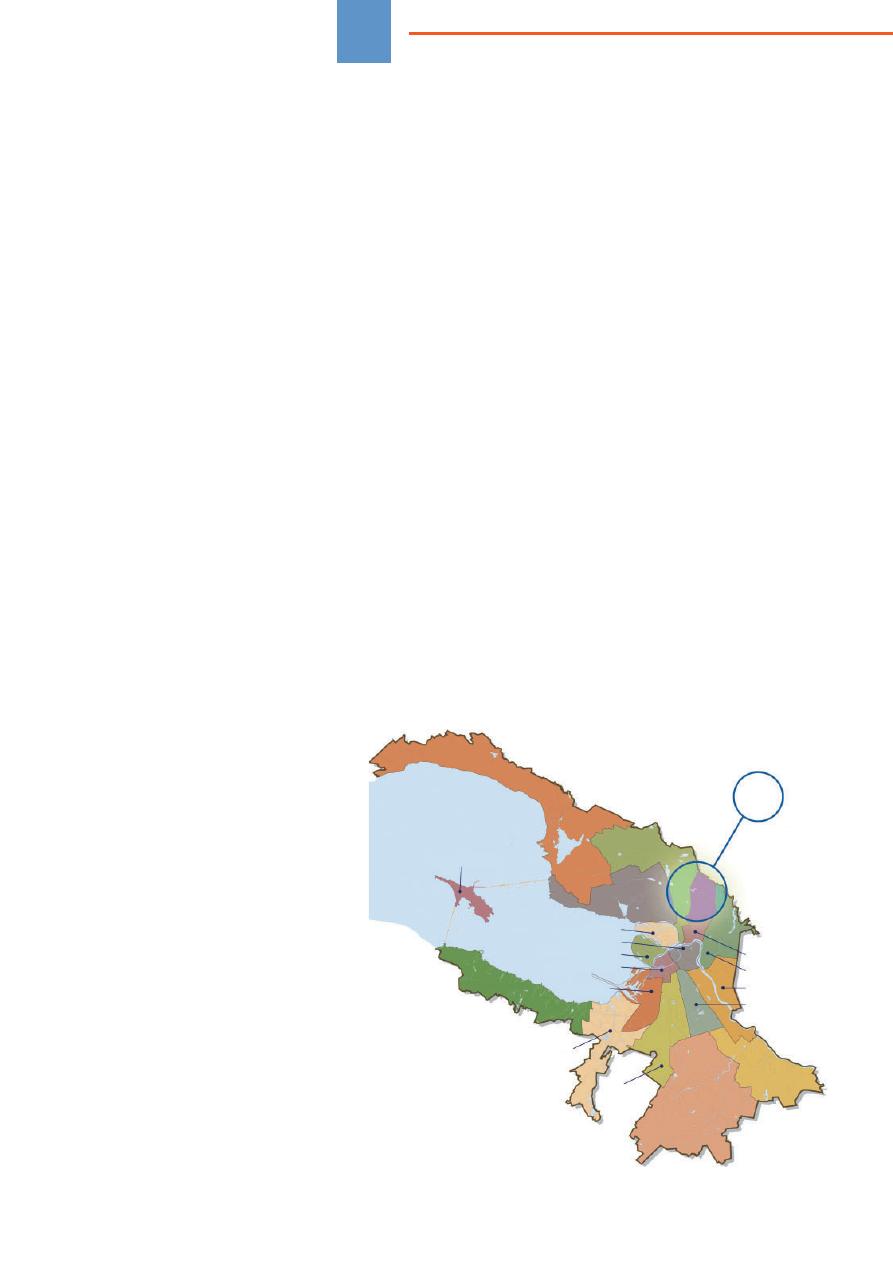 created for the adoption of collegial technical decisions

in  PJSC  "LENENERGO"  and  for  implementation  of

of PJSC "LENENERGO" is responsible for the imple-

mentation of pilot projects aimed at digitalization. The

velopment and innovation, the unit of information tech-

nology, the unit of service implementation and devel-

of operative and process management and situational

management, the economic unit, the unit of ﬁ xed assets

construction, security and representatives of operating

branches. The working group consists of 42 people in

velop the most eﬀ ective generic solutions for later use

in digitalization of PJSC "LENENERGO" network.

An important step of the transition to digital networks

is the creation of Single Grid Control Center and intro-

computational  and  analytical  functions  for  managing

On the sidelines of the Single Grid Control Center

power distribution zones) will be performed. According

to  the  results  of  the  pilot  project  implementation,  the

most eﬀ ective business solutions will be implemented

throughout the network of PJSC "LENENERGO".

Also, it monitors the operating conditions

and modes of power system equipment.

Digital power distribution zone has self-

tions, as well as smart metering of elec-

The  pilot  project  aimed  at  digitiza-

networks is being implemented in PJSC

So  far,  the  Northern  power  distribu-

in the area of Northern power distribution

The  project  of  creating  a  digital  power  distribution

As a part of the

The following stages of creating a digital power dis-

an inclusive design. Termination of design and survey

(including the functions of automatic fault isolation, net-

tem will be based on the operative dispatching service

of the Single Grid Control Center (within the framework

of the GCC project). The dispatching service will com-

and  integration  of  systems  for  automated  information

The stage completion is scheduled in 2020.

As part of the

network elements and the later remote control of 100%

quent  subsystems  integration  into  the  implemented

software  and  hardware  complex  of  the  digital  power 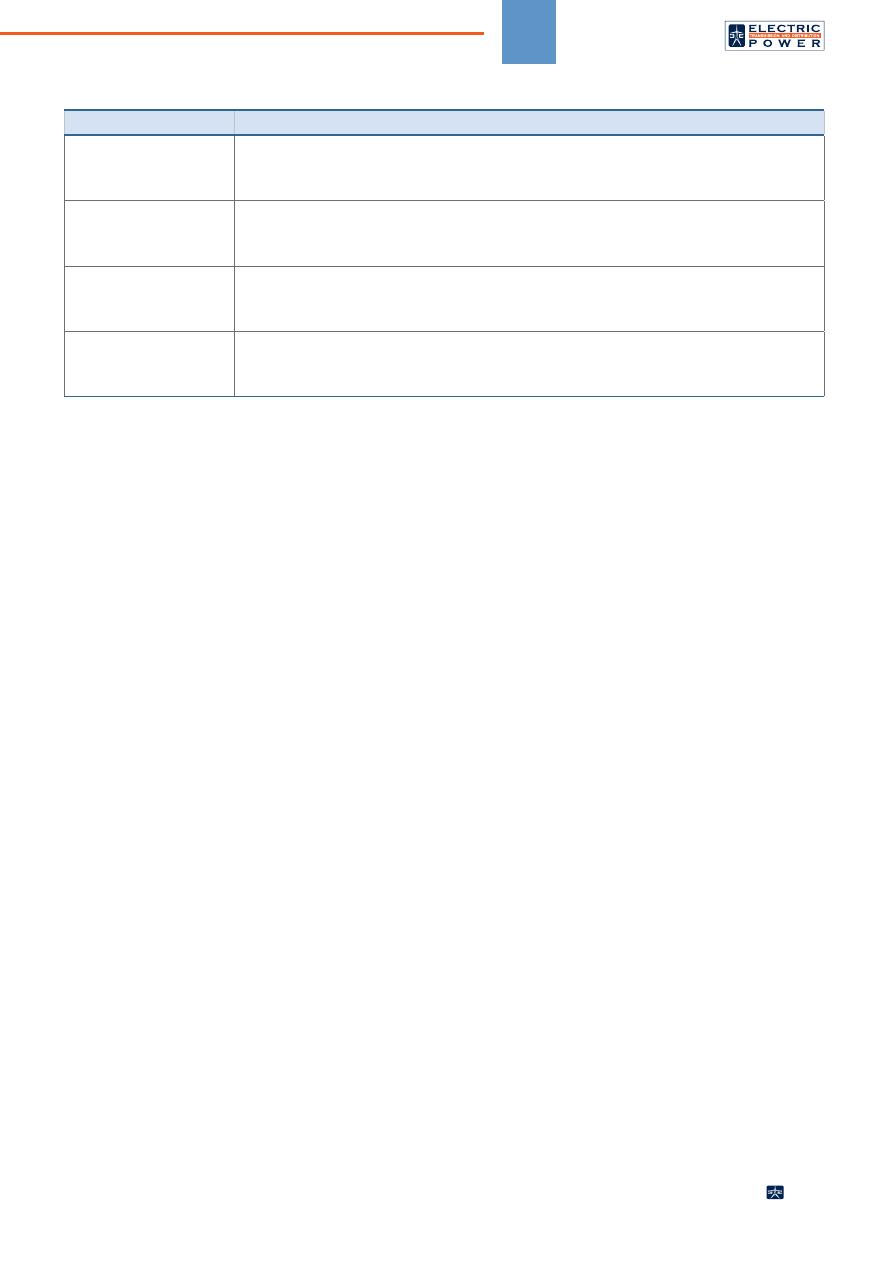 distribution zone management system will be also per-

formed. Implementation of self-repairing functions and

The stage completion is scheduled in December 2021.

As  a  result  of  the  project  implementation,  elec-

tric power losses reduction by 7.45% is expected. The

achievement of such a result will be facilitated by install-

The digital power distribution zone project will have

a  signiﬁ cant  impact  on  the  ﬁ nancial  indexation.  Engi-

of the organization structure of power distribution zone.

The maintenance costs will be reduced by 10.8% (us-

of instruments, remote diagnostics and self-diagnostics

of equipment and systems). Cost of fuel and lubricants

will be decreased by 50%. As a whole, this will result in

power distribution zone at least by 15.2%.

Approximately the same level (15%) is expected to

ﬂ ows in various modes based on actual data and au-

An  added  value  will  be  achieved  due  to  the  potential

of the design and survey work cost. In addition, due to

digital technology, the volume and cost of commission-

dard facilities and digital networks should be taken into

a massive reduction of copper connections.

prove power supply reliability. Based on the analysis of

the completed stages of design and survey work con-

ed reduction of SAIDI and SAIFI indicators by the end

of the pilot project to create a digital power distribution

zone was determined as 50% in relation to the current

status. It is conﬁ rmed by expert assessment of operating

as the introduction of equipment aimed at network digi-

talization. The eﬀ ect will be achieved through the net-

tics and remote controllability of the network.

According to the results of the project implementa-

only on the eﬃ  ciency of power grid operation, but it will

also have a signiﬁ cant impact on the service quality for

•  the time for technological connection of consumers

will be reduced by introducing a settlement function

lines to fulﬁ l the engagements on technological con-

nection, as well as decreasing of new construction

for technological connection due to balanced load;

quency deviation) due to the optimization of electri-

cal network modes and schemes as well as power

due  to  the  network  controllability,  the  introduction

of a self-restoration function and automatic localiza-

as  well  that  electrical  grid  digitalization  will  help  not

only  to  achieve  economic  and  technical  eﬀ ects  when

solving  application  tasks,  but  it  will  signiﬁ cantly  inﬂ u-

as well as using eco-friendlier equipment.

Table 1. Planned changes of business processes in PJSC "LENENERGO" as a result of the project implementation

response to changes in the electrical grid, followed by the ultimate solutions to prevent

accidents and to ensure power supply with increased reliability and economic eﬃ  ciency.

Automation of emergency reserve, automated suggestions for maintenance and

Changes in the organiza-

In accordance with the target structure of the Single Grid Control Center, dispatching

department is excluded from the power distribution zone. Further changes in the

Through the automation of process management (control of switching devices, automatic

localization of the failed elements, etc.), as well as business processes, it is expected the

optimization of standard number of employees. 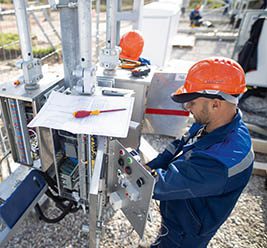 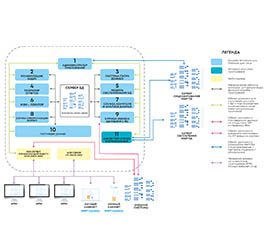 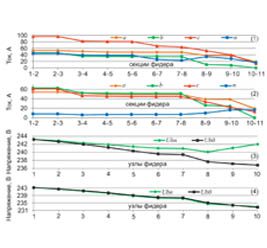 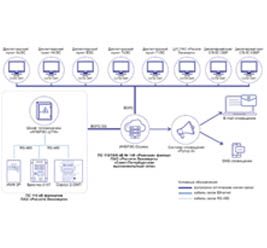 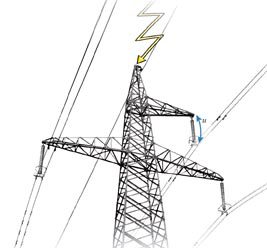